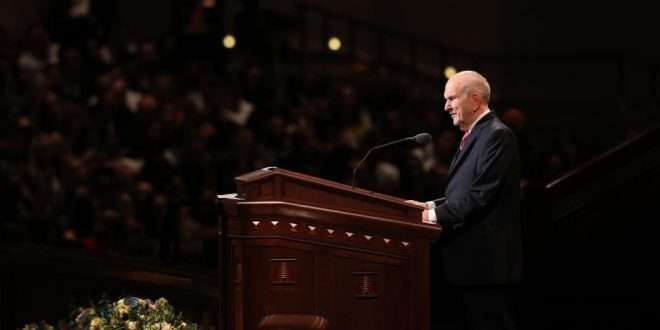 As the final session of the Church’s 188th annual general conference came to a close, Russell M. Nelson, president of The Church of Jesus Christ of Latter-day Saints, announced plans to build seven new temples. These temples will be in the following locations: Salta, Argentina; Bengaluru, India; Managua Nicaragua; Cagayan de Oro, Philippines; Layton, Utah; Richmond, Virginia; and a major city yet to be determined in Russia.

“We want to bring temples closer to the expanding membership of the Church,” President Nelson said. “My dear brothers and sisters, construction of these temples may not change your life, but your time in the temple surely will. In that spirit, I bless you to identify those things you can set aside so you can spend more time in the temple. I bless you with greater harmony and love in your homes and a deeper desire to care for your eternal family relationships. I bless you with increased faith in the Lord Jesus Christ and a greater ability to follow Him as His true disciples.”

These seven announced temples bring the total number of operating temples (159) and temples announced or under construction (30) to 189 worldwide. There are two temples scheduled for dedication this year, including the Concepción Chile Temple (October 28) and the Barranquilla Colombia Temple (December 9). The Jordan River Utah Temple will be rededicated May 20, and the Houston Texas Temple, which needed interior repairs due to flooding last year, will be rededicated April 22. Nine temples are being renovated, including the Asunción Paraguay Temple, Baton Rouge Louisiana Temple, Frankfurt Germany Temple, Memphis Tennessee Temple, Oakland California Temple, Oklahoma City Oklahoma Temple, Raleigh North Carolina Temple, Tokyo Japan Temple and the Washington D.C. Temple. The Mesa Arizona and Hamilton New Zealand Temples are scheduled for closure this year for renovation. Temples under renovation are considered operating temples.

In this nation of more than 1.3 billion people, there are 43 Latter-day Saint congregations and approximately 13,500 members of the Church. The Bangalore (now known as Bengaluru) mission was created in 1993. The first stake (a group of congregations) in India was organized in Hyderabad in May 2012 by President Dallin H. Oaks. Church President Russell M. Nelson, along with Elder Jeffrey R. Holland, will visit Bengaluru on April 19 as part of their global ministry tour.

This will be the first temple in Nicaragua, a country home to nearly 100,000 Latter-day Saints. Church members in this country of more than 6 million people currently travel to neighboring nations such as Costa Rica, El Salvador and Honduras to participate in temple service.

With this announcement, the Philippines will have five temples announced or dedicated, including Cebu City, Manila (2) and Urdaneta. There are approximately 750,000 Latter-day saints in this country of more than 103 million people.

As world headquarters of The Church of Jesus of Jesus Christ of Latter-day Saints, Utah has 2.1 million members of the Church in a state of 3.1 million people. There are 17 operating temples in Utah, including Bountiful, Brigham City, Cedar City, Draper, Logan, Jordan River, Manti, Monticello, Mount Timpanogos, Ogden, Oquirrh Mountain, Payson, Provo City Center, Provo, St. George, Salt Lake and Vernal. The Jordan River Temple has completed extensive interior renovation and is scheduled for rededication on May 20, 2018. The Saratoga Springs Templewas announced at the April 2017 general conference. The Layton Utah Temple will be the 19th in Utah.

Missionaries first arrived in Virginia in the early 1840s and by 1841 some 80 members of the Church were in Virginia. Today, Virginia is home to nearly 100,000 Latter-day Saints. This will be the state’s first temple.

A Major City Yet to be Determined in Russia

The Church had its first presence in Russia in the late 19th century and was officially recognized in May 1991. The first stake in Russia was organized in Moscow in June 2011 by then-Elder Russell M. Nelson. Russia is home to more than 23,000 Latter-day Saints. October 2020 General Conference Will Be Virtual Only