The Gravesites of All LDS Prophets

Joseph Smith is buried in Nauvoo, Illinois, alongside his brother Hyrum and wife Emma. Originally, Joseph’s body had been buried under a building on the Smith homestead; at the time, fears abounded that the grave and body would be stolen or mutilated. In 1928, the bodies were located, excavated, and moved to a new plot in the Smith Family Cemetery where they remain today. The marble slab you see above was added in 1991.

Brigham Young’s grave is located a few blocks west of the Salt Lake Cemetery in a special park known as the Mormon Pioneer Memorial Monument. Other family members can be found near him, including Eliza R. Snow. The bronze marker you can see above was added in 1938. An estimated 15,000 people attended his funeral.

John Taylor is the first prophet to be buried in the Salt Lake Cemetery; all but two prophets after him will be buried there. For nearly two years after his death, no prophet was called. Instead, the Quorum of the Twelve led the Church.

Wilford Woodruff left behind a statement regarding his burial. In part, he wished “a plain marble slab put at the head of my grave, stating my name and age, and that I died in the faith of the Gospel of Christ and in the fellowship of the Saints.” He also wrote that he hoped he could attend his own funeral, “but I shall be governed by the counsel I receive in the spirit world.”

Lorenzo Snow is buried in the Brigham City Cemetary in Brigham City, Utah. It was the death of President Snow that saw a change in policy. Instead of the person who had been an ordained Apostle the longest, it would be the person who had been a member of the Quorum of the Twelve for the longest period of time that would become the prophet. At the time, a few individuals had been members of the First Presidency and held the priesthood office of an apostle without ever having been a member of the Twelve. Under the old rules of succession, John Willard Young would have become the prophet; he was 85 and in extremely poor health. Thus, Snow worked with the Twelve before his death to change the policy.

Joseph F. Smith did not receive a public funeral due to the widespread influenza pandemic. A simple graveside service was held. The second of his wives, Julina Lambson, is buried next to him. 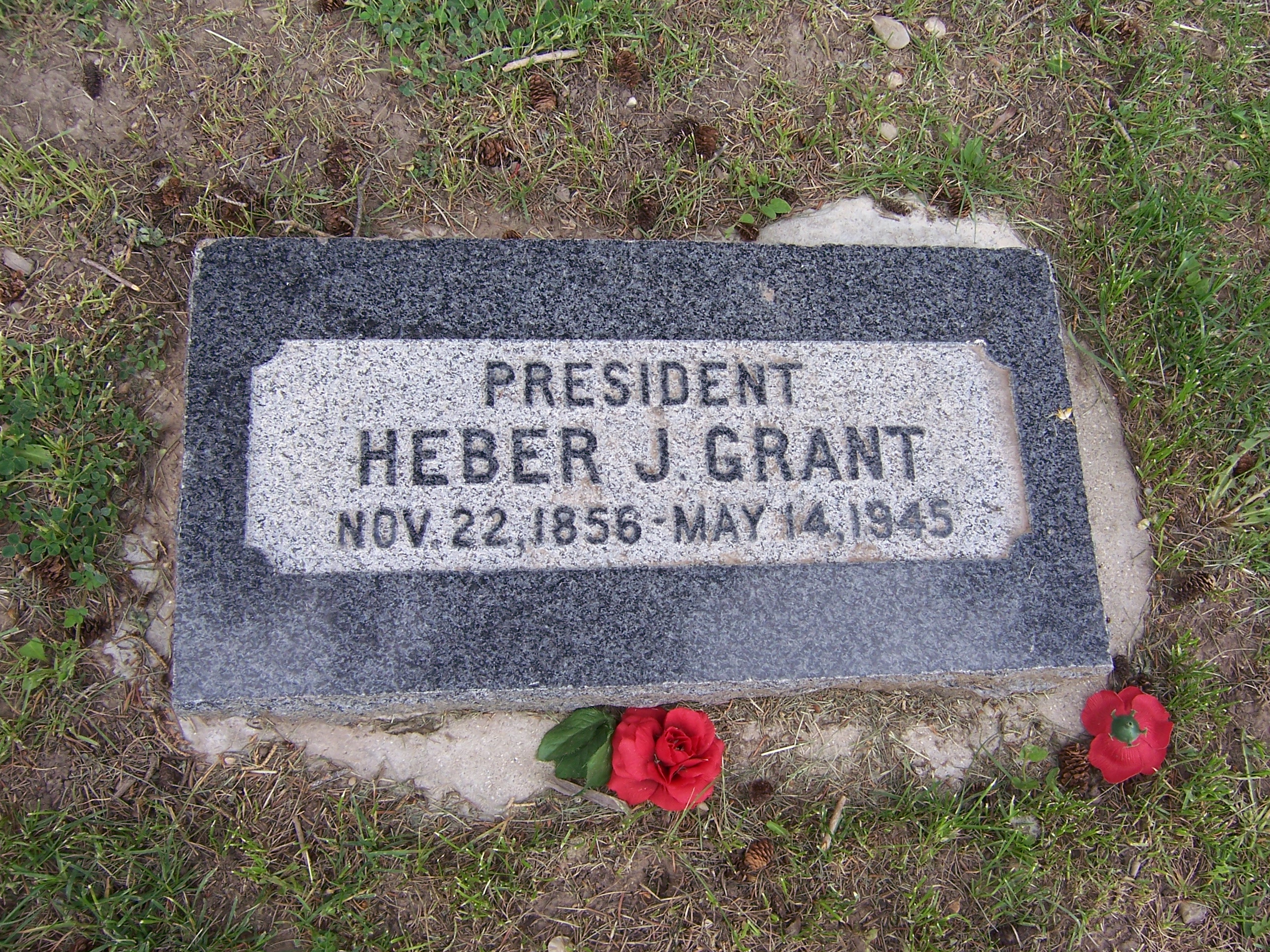 Both a gravestone and obelisk memorialize the grave of Heber J. Grant, located in the Salt Lake Cemetery. At his funeral, one of his counselors, President J. Reuben Clark Jr., said of him: “He so lived his life that it had no dark place across which he must draw a curtain. His life had nothing to embarrass, nothing to hide, nothing of which he must be ashamed.” 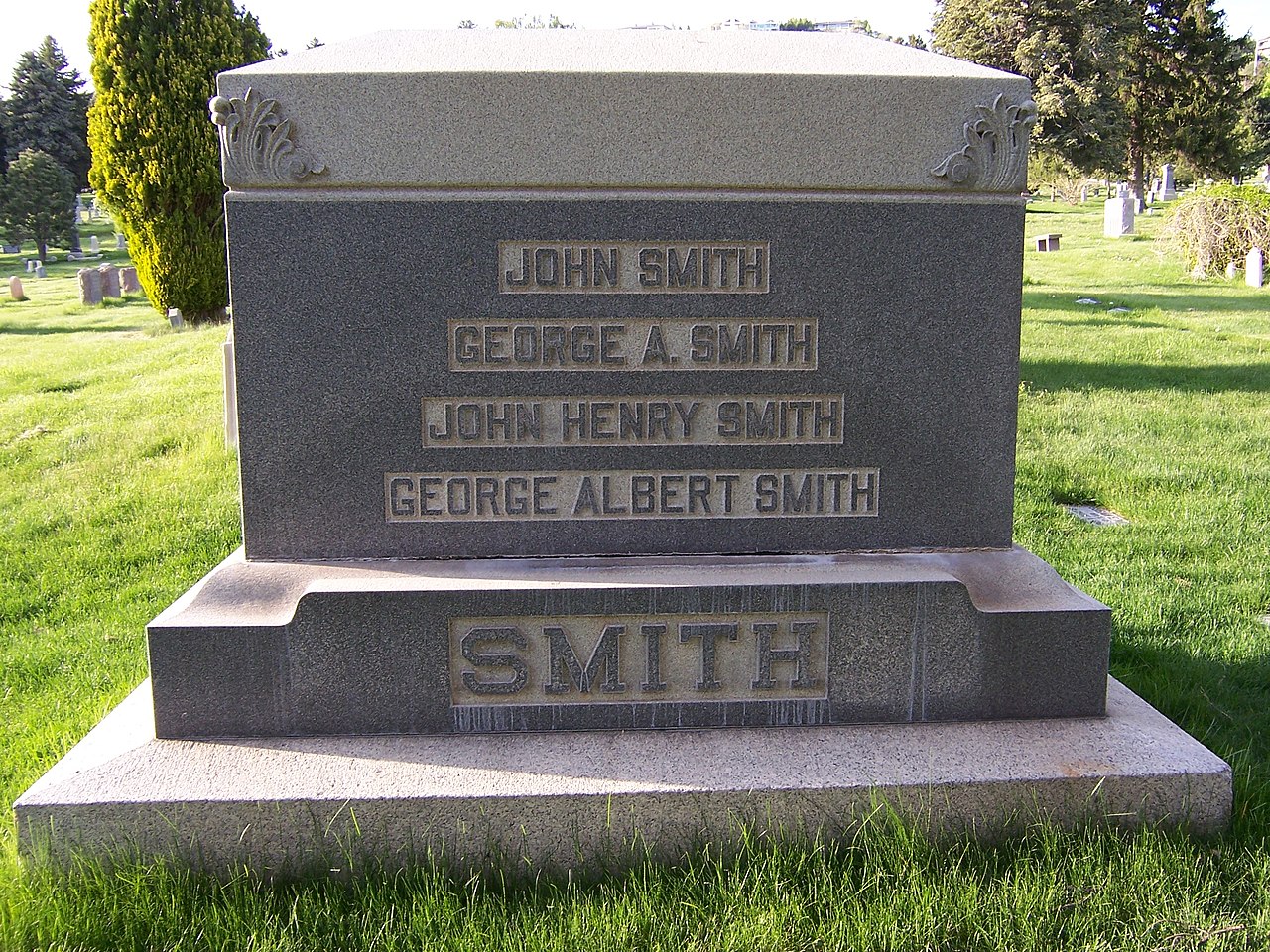 George Albert Smith’s grave is marked by a flat slab. However, a monument also stands nearby to four generations of the Smith family. He passed away quietly in his home with his sons and daughters surrounding him.

David O. McKay is buried in the Salt Lake Cemetery. His final resting place is marked by a tall, granite slab. He is buried next to his wife, Emma Ray Riggs McKay. 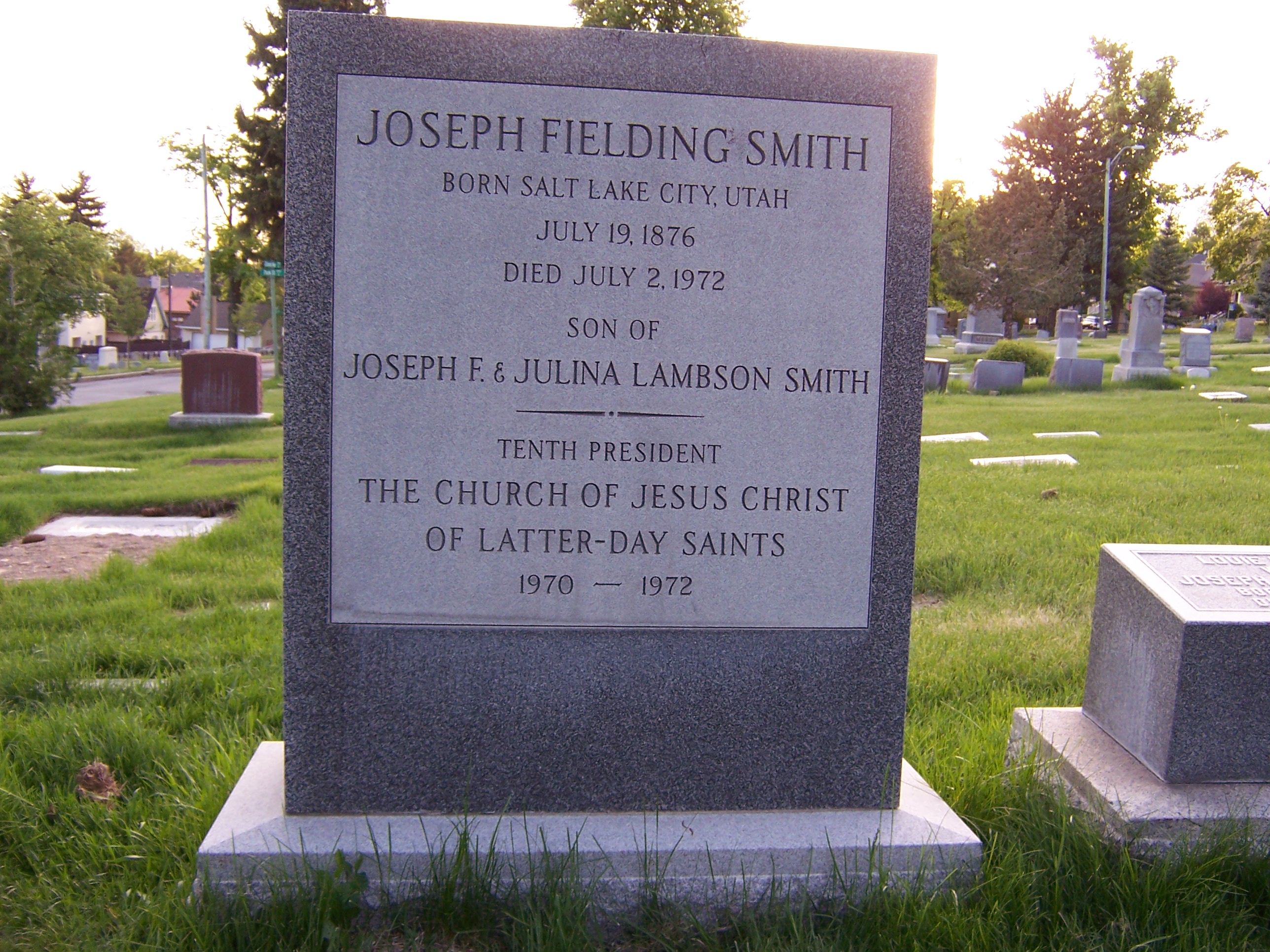 Joseph Fielding Smith’s grave is located just down the hill from his father’s, Joseph F. Smith. 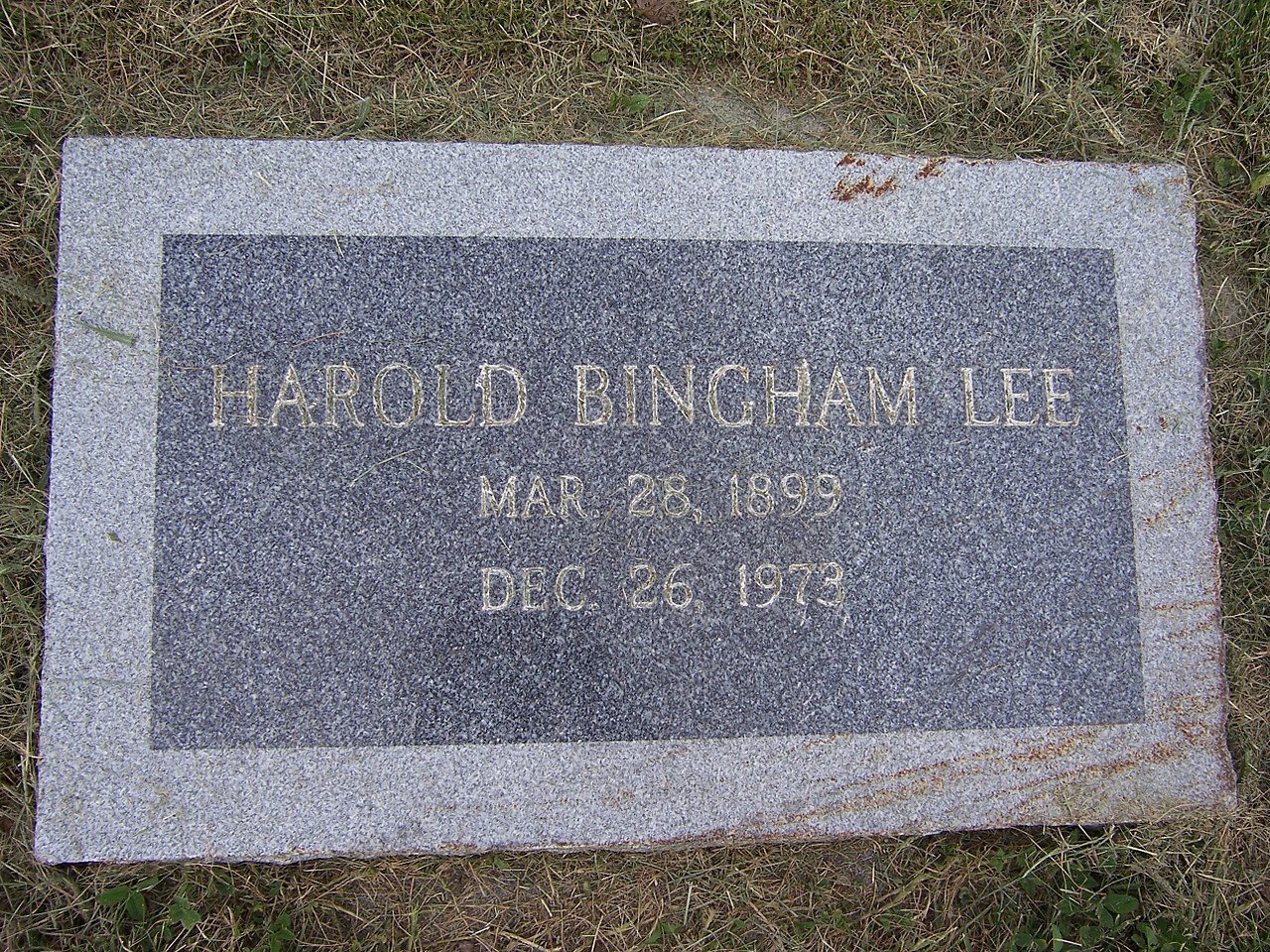 Harold B. Lee’s presidency was the second shortest. He served for approximately a year and a half before a fatal pulmonary hemorrhage took his life the day after Christmas in 1973.

Spencer W. Kimball is buried in the Salt Lake Cemetery alongside his wife Camilla. On his deathbed, Kimball said, “My life is at an end now. She’s so happy, oh so very happy.” When asked who he was referring to, Kimball said he spoke of his mother, who had died when he was eleven.

Ezra Taft Benson is buried in the Whitney Cemetery in Whitney, Idaho. He is only the second Church president to be buried outside of Utah after Joseph Smith, who is buried in Nauvoo, Illinois. 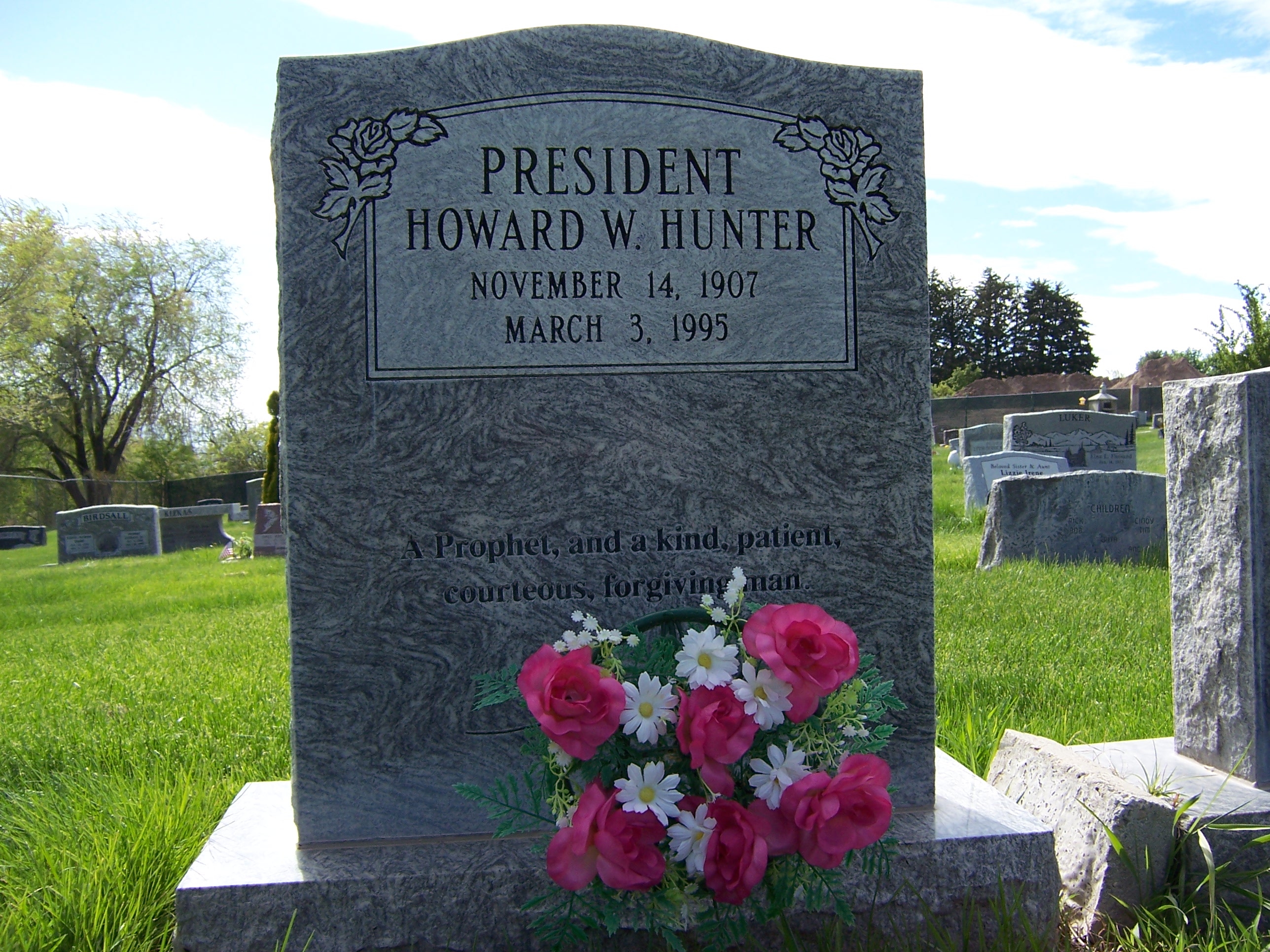 Howard W. Hunter served as the prophet for only 9 months before his death. His grave is located next to that of his first wife, Clara, in the Salt Lake Cemetery.

Gordon B. Hinckley’s headstone is made of the same granite that makes up the Salt Lake Temple and Conference Center. Soil from the grounds of the Preston England Temple, where Hinckley served his mission, was buried with him.

President Thomas S. Monson will be buried in the Salt Lake Cemetery in a private service.