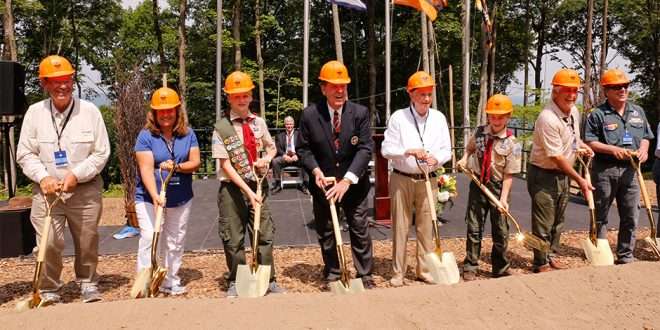 “The need for strong, capable leadership is critical today, both in Scouting and in the world generally,” said President Thomas S. Monson of The Church of Jesus Christ of Latter-day Saints in a video greeting recorded for a groundbreaking ceremony for the new Thomas S. Monson Leadership Excellence Complex in Glen Jean, West Virginia. The event was held Wednesday, June 15, 2016, at the site of the future complex scheduled for completion in 2020.

The new Boy Scouts of America (BSA) complex will be a state-of-the-art facility that will provide hands-on training on the principles of leadership. It will feature guest speakers and offer a variety of training methods and learning experiences in categories such as communication, storytelling and conflict resolution.

“Today as we prepare to break ground for such a center I submit that ‘Thomas S. Monson’ is the ideal name to place on and to match the vision behind such a center,” said Elder Holland. “He whom I call ‘Elder Monson’ or ‘President Monson,’ but whom fellow Scouters have always affectionately called ‘Tom,’ has lived each day of his life in true harmony to his Master, living an exemplary life boys could pattern their own lives on, and in serving his fellowman.”

“Leadership excellence is something President Monson has always strived to achieve personally and to foster in others. He knows — better than anyone I know — that the joy of true leadership is to give all you have to bless and lift others,” said Elder Christofferson.

“The Summit Bechtel Reserve offers life-changing experiences to youth they can’t experience anywhere else and, as such, is a natural fit for this meaningful project,” said Michael Surbaugh, Chief Scout Executive of the BSA. “While Scouts already learn an array of leadership skills in our programs, the complex provides a tremendous opportunity to formalize this training so they can be better prepared to lead throughout their lives.”

President Monson has been a member of the National Executive Board of Boy Scouts of America for more than 46 years. He received the organization’s Silver Beaver and Silver Buffalo awards, as well as the Silver Fox and Bronze Wolf international awards.

More information is available in this news release from the Boy Scouts of America.