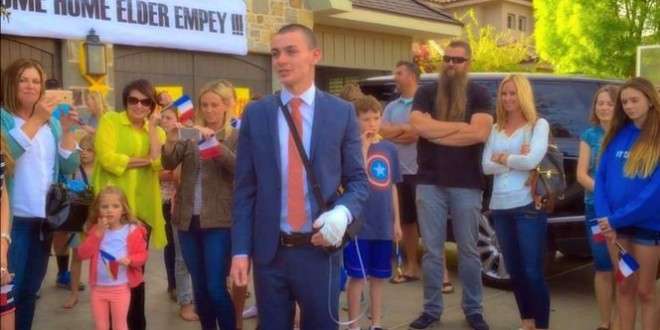 SALT LAKE CITY — An LDS missionary injured in the Belgium terrorist attacks last month was reunited with friends and loved ones in southern Utah Wednesday.

Family members say Joseph Dresden “Dres” Empey, 20, was released from the Burn Unit at the University of Utah Hospital earlier in the day. Photos shared with KSL News show the emotional welcome-home event.

Dres Empey’s father, Court, said his son will now receive physical therapy and other treatment at Dixie Regional Medical Center. While the younger Empey is getting better every day, his father said he is still in pain and feels tired a lot.

“We have been overwhelmed with the love, kindness and prayers for our family,” Court Empy said in a social media post. “We feel so lucky and blessed.”

Read the rest of this article on KSL.com.

Brandon is the husband to an incredibly talented soccer mom, a father to the cutest 4-year old twins you have ever seen, and the doggy daddy to two Goldendoodles named Jake and Penny. Brandon has served in various church capacities including full-time missionary in Madrid, Spain, youth instructor, Young Men’s Presidency, Executive Secretary, temple worker, and Elders Quorum Presidency. Brandon is the owner of LDSBookstore.com which has been featured as one of the fastest-growing companies in Utah. He enjoys playing basketball, ping-pong, and throwing his twins in the air.

How to Invite Others to Light The World

The Church of Jesus Christ’s annual Light The World initiative has officially begun. This year’s …