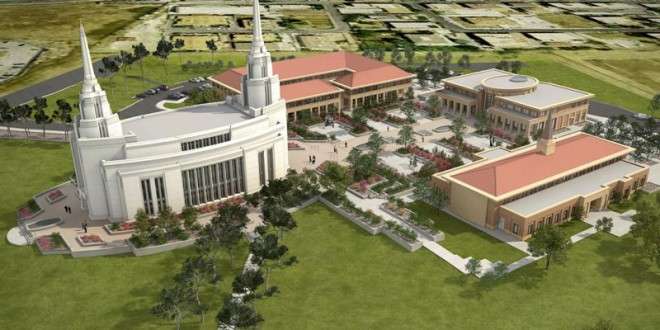 Mormons vs. Romans: Insights from Rome on New Mormon Temple

Originally reported by Barbie Latza Nadeau for The Daily Beast:

ROME, Italy — On the outskirts of Rome along the ancient Catholic pilgrim route known as the Via Francigena and not far from a giant shopping center featuring a massive IKEA and the French do-it-yourself Mecca called Leroy Merlin, cranes are hoisting giant spires onto the top of a Baroque-revival-style church. But unlike most of the religious edifices erected in Catholic Rome, this Roman temple is being built by the Church of Jesus Christ of Latter-day Saints (LDS) of Italy to accommodate a congregation that has grown from 9,000 to nearly 30,000 followers in less than 30 years.

The Rome Temple Complex of the LDS sits on 15 acres and will feature lush gardens, and a 40,000-square-foot temple with floor and ceiling designs to mimic Michelangelo’s Capitoline Hill plaza overlooking the Roman forum. Marble from Italy, Spain, Turkey, and Brazil is being used to decorate the interior and exterior spaces. The grounds will also include a stake center meeting house (a stake being roughly similar to a Catholic diocese), a visitor center, a family history library and a special Mormon-only hotel for workers and worshippers.

The growth of the LDS church in Italy may be moving fast, but not without opposition. Shortly after the first Mormons were baptized in Italy in 1850, the Catholic Church demanded that members of the congregation emigrate to Salt Lake City. The Italian government refused to allow the LDS church to formally gather until 1951. By 1964, there were just 230 members who were allowed to do missionary work in the country, and it took until July 30, 2012, for Italy’s government to finally legally recognize LDS as a religion in Italy and full “partner of the state.”

According to Massimo De Feo, president of the Rome stake, the construction of the temple is nothing short of a miracle, not least of because of the way the project, which will be the largest in Europe, has raised eyebrows in Catholic circles.