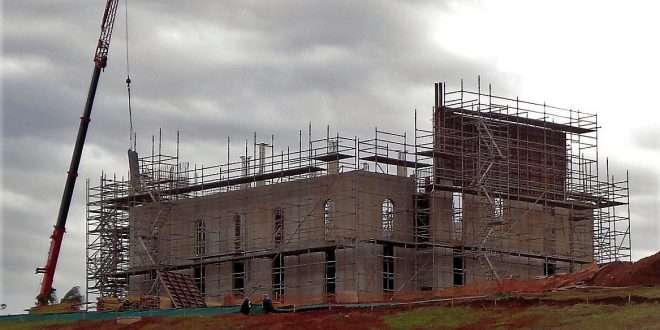 Artist Brian Olson created a 3D model of what the Lisbon Portugal Temple will look like once completed. The temple construction has yet to begin, but at the construction site crews are currently laying brick layers to fill the auxiliary meetinghouse walls. Watch the 3D model here.

Concrete forms are being set for the upper east and west facade walls of the Durban South Africa Temple. At the lot housing facility, structural framing is finished for the ground floor, and scaffolding is going up around the upper floor.

The Mormon Miracle Pageant, which takes place on the grounds of the Manti Utah Temple, began on Thursday 15 June. A 25-piece orchestra provided the music and over 1,000 cast members represented the stories of early saints. The pageant runs 15-17 June and 20-24 June. The event is free and open to the public.