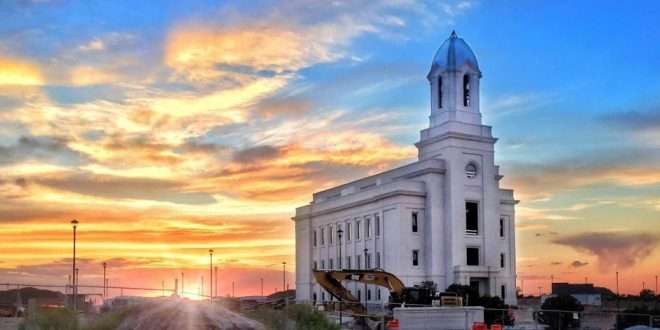 Construction Update: The ground has been prepared for the foundation of the Fortaleza Brazil Temple. Footings were poured and concrete forms were set.

Update: The open house for the Freiberg Germany Temple ended on August 27th. Its rededication date can be found below.

Temple Facts: The Freiberg Germany Temple was announced in October 1982. The groundbreaking ceremony was held in April 1983 by Thomas S. Monson and was dedicated by Gordon B. Hinckley in June of 1985. It has one ordinance room and two sealing rooms. It is currently having public tours and will be rededicated on September 4, 2016.

Construction Update: A new photo below of the Cedar City Utah Temple shows a colorful sunset. Also, zinc shingles were laid on the temple roof, giving the tower a finished look.

Temple Facts: The Cedar City Utah Temple was announced in the April 2013 session of General Conference. The groundbreaking ceremony was held in August 2015 by Elder L. Whitney Clayton. The temple will be approximately 42,657 square feet, will serve members in 17 stakes in Southern Utah and Eastern Nevada. The Cedar City Utah Temple will be the seventeenth temple in Utah. Estimated completion is late 2017.

Update: The Sapporo Japan Temple was dedicated on Sunday, August 21st. It became the 151st operating temple. See an article about the dedication here.

Temple Facts: The Sapporo Japan Temple was announced in the October 2009 session of General Conference. The groundbreaking ceremony was held in October 2011 by Elder Gary E Stevenson. Temple grounds will also be occupied by by a mission office, temple missionary housing, temple patron housing, a arrival center, and a future meetinghouse. President Russell M. Nelson dedicated the temple on Sunday, August 21, 2016.

Construction Update: The final piece of granite was set in place at the Hartford Connecticut Temple. The granite is a decorative urn. A three-tiered fountain has also been installed.

Temple Facts: The Hartford Connecticut Temple was announced in the October 2010 session of General Conference. The groundbreaking ceremony was held in August 2013 by President Thomas S. Monson. The temple will be approximately 25,000 square feet, will serve members in New York and New England areas. The Hartford Connecticut Temple will be the second temple in New England, following the Boston Massachusetts Temple. The dedication will be held on November 20, 2016.