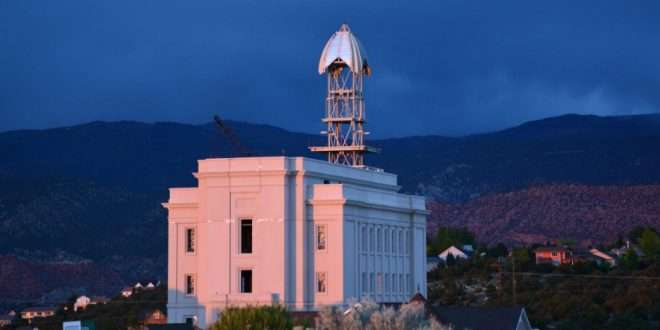 Construction Update: Beautiful photos of the Tucson Arizona Temple have been taken. They show the symmetry of the dome. A lantern will top the structure that is shown.

Temple Facts: The Tucson Arizona Temple was announced in the October 2012 session of General Conference. The groundbreaking ceremony was held in October 2015 by President Dieter F. Uchtdorf. The temple will be approximately 34,000 square feet, will serve members from ten stakes. The Tucson Arizona Temple will be the sixth temple in Arizona. Estimated completion is late 2017 to early 2018.

Update: Free open house tickets for the Philadelphia Pennsylvania Temple are now available here. Its open house will be held August 10 through September 9.

Temple Facts: The Philadelphia Pennsylvania Temple was announced in the October 2008 session of General Conference. The groundbreaking ceremony was held in September 2011 by President Henry B. Eyring. The temple will be approximately 53,000 square feet and will be the first temple built in Pennsylvania. The open house is planned for August 10, 2016 through September 9, 2016. The temple is scheduled to be dedicated on Sunday, September 18, 2016.

Update: On Sunday, May 22, a thunderstorm resulted in the Bountiful Utah Temple’s Angel Moroni being struck by lightning. It left holes in the back and head. The statues, though, are actually designed to protect the building by serving as lightning rods. See more about this story here.

Renovation Update: The Dallas Texas Temple has received some changes to its grounds. Garden areas surround the temple entrance, along with newly planted trees and flowers.

Temple Facts: The Dallas Texas temple was the 30th operating temple of the church and the first in the state of Texas. The The temple was originally dedicated in October 1984 by Gordon B. Hinckley, and a new addition was added and dedicated in March 1989. The temple is 44,207 square feet, and serves approximately 24 stakes in Northern Texas and Northern Louisiana.

Construction Update: Workers finished the back wall panels on the exterior of the Cedar City Utah Temple. The front tower is still in progress.

Temple Facts: The Cedar City Utah Temple was announced in the April 2013 session of General Conference. The groundbreaking ceremony was held in August 2015 by Elder L. Whitney Clayton. The temple will be approximately 42,657 square feet, will serve members in 17 stakes in Southern Utah and Eastern Nevada. The Cedar City Utah temple will be the seventeenth temple in Utah. Estimated completion is late 2017.

Construction Update: At the Star Valley Wyoming Temple, workers are inside hanging sheetrock, painting walls, and more. Preparations are being made for the walkways that will surround the temple. The photos below show the rain from late May.

Temple Facts: The Star Valley Wyoming Temple was announced in the October 2011 session of General Conference. The groundbreaking ceremony was held in April 2015 by Elder Craig C. Christensen. The temple will be approximately 17,000 square feet, will serve members in the following six stakes: Afton Wyoming Stake, Kemmerer Wyoming Stake, Montpelier Idaho Stake, Montpelier Idaho South Stake, Soda Springs Idaho Stake, and Thayne Wyoming Stake. The Star Valley Wyoming temple will be the first built in the state of Wyoming. The dedication will be held on October 30, 2016.