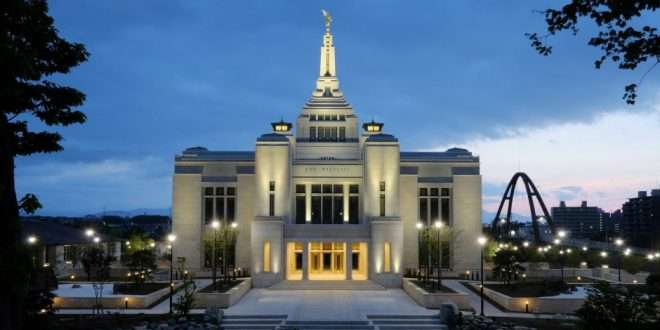 Construction Update: It appears that construction is starting at the Fortaleza Brazil Temple site. Heavy equipment arrived and ground has been cleared and leveled.

Update: There are now less than six weeks before the public open house at the Sapporo Japan Temple. It is undergoing final preparations and a new aerial photograph of the temple complex can be seen here. View other breathtaking photos below.

Temple Facts: The Sapporo Japan Temple was announced in the October 2009 session of General Conference. The groundbreaking ceremony was held in October 2011 by Elder Gary E Stevenson. Temple grounds will also be occupied by by a mission office, temple missionary housing, temple patron housing, a arrival center, and a future meetinghouse. The open house will begin on Friday, July 8 and continue through Saturday July 23, 2016. The temple will be dedicated on Sunday, August 21, 2016.

Construction Update: At the Hartford Connecticut Temple, sod has been laid down and trees have been planted. Granite is still being added to the exterior.

Temple Facts: The Hartford Connecticut Temple was announced in the October 2010 session of General Conference. The groundbreaking ceremony was held in August 2013 by President Thomas S. Monson. The temple will be approximately 25,000 square feet, will serve members in New York and New England areas. The Hartford Connecticut Temple will be the second temple in New England, following the Boston Massachusetts temple. The dedication will be held on November 20, 2016.

Construction Update: Work is progressing on the entrance plaza and garden areas that will welcome patrons and visitors to the Philadelphia Pennsylvania Temple. Bronze entrance doors have been installed, along with dark granite pavers.

Temple Facts: The Philadelphia Pennsylvania Temple was announced in the October 2008 session of General Conference. The groundbreaking ceremony was held in September 2011 by President Henry B. Eyring. The temple will be approximately 53,000 square feet and will be the first temple built in Pennsylvania. The open house is planned for August 10, 2016 through September 9, 2016. The temple is scheduled to be dedicated on Sunday, September 18, 2016.

Update: A new Angel Moroni statue now stands on top of the Bountiful Utah Temple. This statue was originally built for the Meridian Idaho Temple, but was needed in Bountiful after lightning damaged Bountiful’s Angel Moroni. It left holes in the back and head. The statues, though, are actually designed to protect the building by serving as lightning rods.

Construction Update: Workers have started roofing the Tucson Arizona Temple Dome. Decking and another layer of protective material is being attached to the existing framework. Soon, workers can start laying shingles.

Temple Facts: The Tucson Arizona Temple was announced in the October 2012 session of General Conference. The groundbreaking ceremony was held in October 2015 by President Dieter F. Uchtdorf. The temple will be approximately 34,000 square feet, will serve members from ten stakes. The Tucson Arizona Temple will be the sixth temple in Arizona. Estimated completion is late 2017 to early 2018.