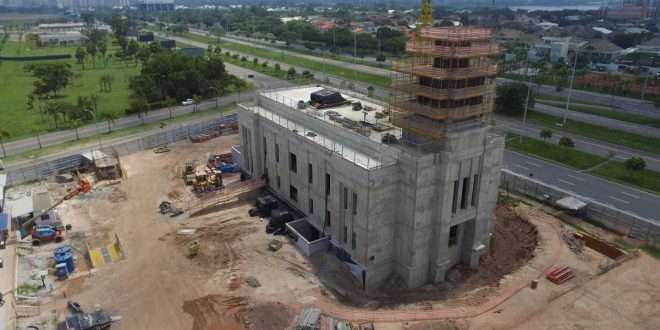 Thanks to members of the church worldwide and our friends at LDSChurchTemples.com for providing these updates. Please Note: We report all information we are given. It is possible that progress has been made on other temples worldwide that we have not been made aware of.  If you have updates (including pictures or video) about a temple near you, feel free to send it to calledtoshare (at) ldsdaily.com.

Renovation crew workers at the Oakland California Temple have removed the large water fountain feature that sat on the northern edge of the grounds. Changes to the temple will take at least one year; the building will be updated throughout and brought up to code.

This week the Washington D.C. Temple closed for a major renovation project that is expected to last for two to three years. The temple’s mechanical and electrical systems will be the focus of the upgrades, but all finishes and furnishings will be refreshed as well.

After a year of construction, the structural framing for the Rio de Janeiro Brazil Temple is nearing completion. The final concrete walls are being poured for the body of the steeple, which will be topped by a cone-shaped spire and angel Moroni statue. Once the temple is complete, it will be the eighth operating temple in Brazil.

A delivery of precast concrete panels has been delivered to the Durban South Africa Temple site. Crews have bolted the first twelve to the exterior walls of the temple. Concrete is being poured for the front veranda of the missionary housing facility and driveway curbing.

The Arequipa Peru Temple site is along an important tourist road in the city; as such many people in the metro area have been stopping by the structure to see construction progress.

Lights Up on Barranquilla Temple

At dusk on Thursday night, lights on the grounds of the Barranquilla Colombia Temple were tested. Elsewhere on the grounds, palm trees and other plants have been added to garden spaces to beautify the grounds. The temple is set to be dedicated on Sunday 9 December 2018.